It is mandatory for all patients and visitors to wear a face mask when attending the OSV rooms.

The hip is a ball and socket joint. The socket is a hemispherical area in the side of the pelvis, specifically named the acetabulum. The ball is the spherically shaped end of the thigh bone or femur. These two bones meet at a highly congruent and stable joint with surfaces lined by a very smooth and virtually frictionless surface of articular cartilage. Many structures help to keep the ball safely in the socket, but still allowing a remarkably good range of motion at the joint. A complicated set of ligaments form a strong capsule around the joint, and a rim of fibro cartilage, called the acetabular labrum forms a ring that encircles the femoral head. A short ligament deep inside the hip joint called the ligamentum teres also helps to hold the ball in the socket.

Surrounding all of this are groups of strong muscles which provide the force to move the joint. In front of the hip are the hip flexor muscles and the quadriceps muscles. To the side and behind the hip are the powerful gluteal muscles, with other small muscles found underneath these larger ones. The groin or adductor muscles are found on the inner side of the thigh and hip.

All of this is encased in a sleeve of tough tissue that separates the muscles from the superficial layers of the body, namely the skin and fat layer. This tissue is called the fascia lata, and has an important thickening down the side of the thigh called the iliotibial band (ITB). Lying in between the iliotibial band and the bony prominence of the hip joint, and the attached gluteal muscles, is the trochanteric bursa, a thin sac containing lubricating fluid.

Pathological conditions of the hip

All of the structures mentioned above may suffer from conditions or injuries that can cause pain or a reduced function of the hip joint. Arthritis is a condition that affects the inner workings of the hip joint itself, usually with deterioration or damage to the smooth articular surface of the bones. The acetabular labrum and ligamentum teres are both structures that can be damaged or torn, particularly when arthritis is present, but also when the joint is free of any arthritis. Various injuries and degenerative conditions can affect the muscles around the hip, and bursitis is a condition that can cause a painful area to develop where the iliotibial band rubs on the underlying bony prominence of the hip.

Some condition scan affect the development of a normal hip in newborn infants and growing children, and other bone diseases such as osteoporosis and osteonecrosis can seriously damage the quality of the bones of the hip in adults.

There are multiple therapeutic options that can be used for the treatment of conditions involving the hip. Simple measures such as pain killers and anti-inflammatory medications are often all that is needed. In many conditions there is a role for physiotherapy or other forms of local treatment. Some problems may warrant arthroscopic surgery to the hip joint, and others still may require replacement of the joint with a prosthetic hip. In many cases the correct treatment of a hip condition will involve the use of many of these options in combination. 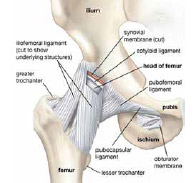 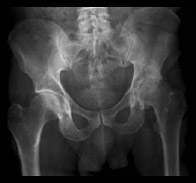 These notes have been prepared by orthopaedic surgeons at OrthoSport Victoria. They are general overviews and information aimed for use by their specific patients and reflects their views, opinions and recommendations. This does not constitute medical advice. The contents are provided for information and education purposes only and not for the purpose of rendering medical advice. Please seek the advice of your specific surgeon or other health care provider with any questions regarding medical conditions and treatment.